As if Los Angeles needed another museum!  It ranks third in the world behind Moscow and Paris), and it just added a stellar one to its impressive collection - the Academy Museum of Motion Pictures.  And what better place than in LA - the entertainment capital of the world.  Visiting this museum, to me, is exciting for four reasons: the architecture, the thoughtful exhibits, and the surrounding attractions.  Here's my review of this exciting new museum.

The architects then added a high-tech, almost space-age "bubble" to the original building.  This spherical addition houses a 1,000 seat theatre (with cushion seats the same color as the Red Carpet) and a stunning observation deck - the Dolby Family Terrace - with views to the north of the Hollywood and Beverly Hills.
Piano exposes the building's infrastructure with lots of glass and clear, composite surfaces.  Even the elevators have glass doors.  This brings the outside into the museum and makes the journey between floors more interesting, especially the walk from the museum across the skybridge to the observation deck. 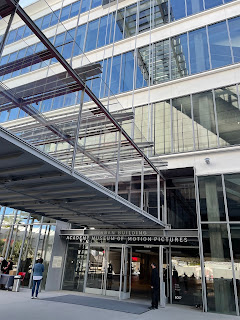 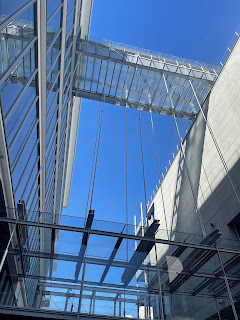 2.  Wonderful exhibits - You'll love exploring the movie exhibits housed in the restored Saban Building.  There are four floors of fascinating exhibits - accessible by elevator or escalators.  The ground floor contains " theme, a nice restaurant and bar, the museum store and a help desk.  But the real action starts on Level 2 with its Stories of Cinema exhibits, continued on Level 3.  Level 4 is for special, large exhibits, and Level 5 is a flexible space for special events, also providing access to the sky bridge to the Observation Terrace.  My only criticism was the small exhibit introducing "Stories of Cinema" on Level 1.  The series of film clips were interesting but there was no explanation how they tied together.
On the four levels, there is lots to explore with special exhibits on backdrops, sound production and technology.  An effort is made to highlight a diverse collection of filmmakers and actors.  For example, on Level 4, there is an extensive exhibit on the acclaimed Japanese filmmaker Hayao Miyazaki.  The beautiful artwork of his animated films had never been released beyond his native Japan before.  It will be fun to watch the changing exhibits within this beautiful new museum.  And, I can't wait to sit in the 1,000 seat Geffen Theater in those plush red seats!

3.  Culturally rich location - Another wonderful aspect of the new Academy Museum is the surrounding area - one of the most attraction-rich in the region.  This museum row area finds the Petersen Automotive Museum across the street, the Los Angeles County Museum of Art (LACMA) next door, and the La Brea Tarpits on the adjacent corner.  The latter two by the way are in major renovation mode.  Finally, just 1/2 mile north is LA's Original Farmers Market with its over 20 specialty restaurants and food stands.  My travel tip is to arrive no later than 11:30 AM so you can beat the lunch crowd.  Wow, it's fun to explore the labyrinth of stands at your leisure.  If you want a more upscale dining of shopping experience, just go next store to Rick Caruso's beautiful shopping mall fashioned as a perfectly-proportioned street - The Grove. 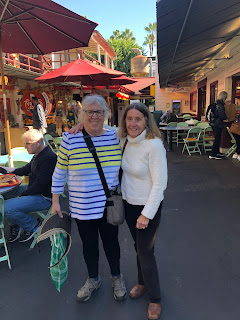 I hope you'll join me on my next tour of the new Academy Museum of Motion Pictures.  It's a cultural and architectural experience that is quite memorable.  And sit back, relax and take in the sights on a  comfortable recliner bus.