Hoffy Tours completed its first international tour this October and November with a week-long Day-of-the-Dead trip to colonial Mexico.  There is so much to see and do in this beautiful part of Mexico, and I can't wait to offer another tour next year.  Enjoy the photos and commentary.

A Dream Realized: With a grandmother born in Mexico and years of teaching Spanish, I've always wanted to lead a tour to Colonial Mexico.  My wish came true from Oct. 28 to Nov. 4, as I lead a group of 15 travelers to San Miguel de Allende and Guanajuato.  Located in Mexico's central plateau at an elevation of 6,000 feet, the climate is ideal for exploring, taking pictures and being comfortable.  In terms of vibrant street life, high-quality folk art,  reasonable prices, beautiful architecture, interesting history, friendly people and great food, I can't imagine a better place to visit.  The three cities we visited - San Miguel de Allende, Guanajuato, and Dolores Hidalgo - represent the cradle of Mexican Independence.  In fact, they could be considered the "Lexington-Concord" of Mexico.  Going during "El Dia de los Muertos" with all its color and festivities was an added bonus!


Very Easy to Get to:  I can't overstate the convenience of this trip.  The flight from LAX was only three hours to Leon, Mexico where we boarded two vans for the 90 minute trip to San Miguel.  We rented four homes near the downtown plaza or "jardin" and hired local housekeepers for breakfasts and housekeeping.  Of course, hotels are nice, but the informality of staying in a home with lots of room and a refrigerator, washer and dryer, and rooftop terrace was unbeatable.  My wonderful and talented travel agent and friend, Stephanie Reid, flew down to San Miguel one month prior to the trip to check out the houses.  And, my oh my, they were drop dead gorgeous, replete with art work.
Side trip to local pyramid - La Canada de la Virgen - with archaeologist Albert Coffee:  On Day 3, we enjoyed a fascinating excursion to a recently excavated archaeological site.  The area was discovered in 2011 and was constructed by the Otomi people around 530 AD on a hillside only 30 minutes from San Miguel.  Although the pyramid and adjoining structures are small compared to Teotihucan north of Mexico City, this discovery brings "meso-america" (middle American) much farther north than was previously sought.  The 360 panorama and astrological calculations designed into the architecture was very impressive as was Dr. Coffee's extensive knowledge and great story-telling.  I recommend his tour to anyone visiting the area - Albert Coffee Archeotours 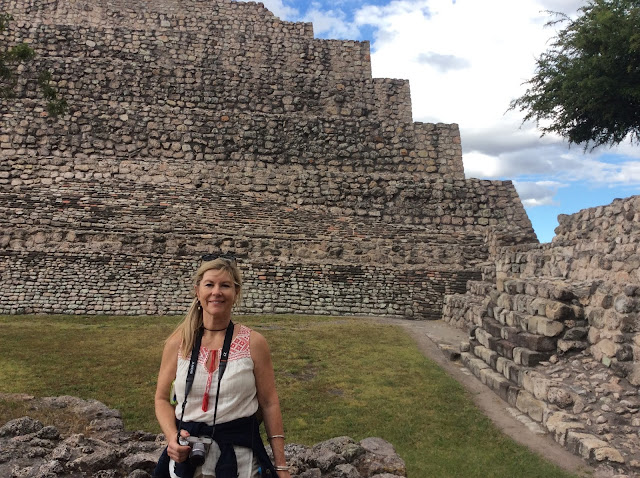 Visiting during Dia de los Muertos - extra colorful, extra fun!:  Colonial Mexico would be wonderful to visit anytime, but we chose the excitement of Dia de los Muertos.  Everywhere we turned we saw variations of "La Catrina" (the "skeleton woman" caricature made famous by Jose Guadalupe Posada in 1912) and the decorative marigold flower symbolizing Dia de los Muertos.  A huge added treat for us was having our faces painted as skeletons and marching in "El Desfile de las Catrinas" through the narrow streets to the plaza.  I'll never forget the hundreds of Mexican families taking our pictures and delighting in our costumes.  We were impressed by the openness and welcoming nature of  the Mexican people to foreigners, and we appreciated their reverence and remembrance for those who have departed this earth.

Excursion to Guanajuato - capital city and colonial jewel:  Only 90 minutes from San Miguel is the capital city of the state of Guanajuato and another United Nations World Heritage Site.  This elegant and colorful city, made wealthy in the 1700 and 1800s from the richest silver mines in the Americas, perches above and within a narrow valley.  With winding streets and picturesque lanes and wealth of  baroque and neoclassical architecture, Guanajuato has a very European flavor, except that it is more colorful!  Whereas San Miguel's design review governance permits seven colors, the palette in Guanajuato is unlimited.  The day we visited competing student groups were completing Dia de los Muertos street art.  In October, Guanajuato hosts and internationally-acclaimed Cervantes Festival - celebrating Spain's most famous novelist and his wonderful creation - Don Quijote.  Guanajuato is also the birthplace of the famed muralist Diego Rivera.

Beautiful folk art - here, there and everywhere!:  I've always been amazed at the quantity of art, ceramics, knick-knacks, and souvenirs available in Mexico.  But I probably shouldn't be surprised from a country of 119 million!  In fact, with 31 states and over 50 indigenous peoples, Mexico may have the richest art traditions of any Latin American country.  With the dollar trading at almost 19 pesos, the bargains were everywhere.  San Miguel de Allende is famous for art galleries, Dolores Hidalgo for pottery and Guanajuato for jewelry, but each city had a wide variety of wonderful art pieces.


A personal note of gratitude and respect for Mexican culture - Having completed this wonderful tour, I'm grateful for the hard work of Stephanie Reid, a gifted travel agent and friend, whose scouting trip made all the details fall together beautifully.  In addition, I'm so happy that this part of central Mexico has done such a stellar job preserving and sharing their beautiful culture.  Despite what you may read of Mexico's troubles, this country has many proud, wonderful and talented people.  Viva Mexico!  Until the next tour!