Downtown LA keeps getting more and more fun - so we couldn't resist!  The Architectural Guild of South County signed up for a Hoffy Tour and, hopefully, came away with big smiles and a deeper view of many of the positive changes happening in our nation's second largest city.


With 23 architects, landscape architects, urban planners and friends, we hopped on the VIP Mini-Coach and were at the Arts District in 55 minutes (405 to 710 to 5 to 101!).  Our first stop was the beautifully appointed Zinc Cafe and Market on Mateo Street for coffee and pastries.  With an inner olive tree courtyard, bar, patio seating and counter service, the Zinc is hard to beat.  We were joined by Arts District resident Bob Shilland and his girl friend who gave us an impromptu tour of the many new venues in the district.  People loved the Urth Cafe's art deco exterior, the DWP's creative use of scrap iron as a decorative element, the National Biscuit Company lofts and the countless murals.

We checked out the biggest project in the area - One Santa Fe - a mixed-use, 1/4 mile long development containing 438 apartment units.  Designed by Michael Maltzan and opened in 2014, the building runs north to south just east of the Southern California Institute of Architecture and just west of the LA River.  The minimalist facade of brilliant whites and "Calderesque" reds is complemented by interior courtyards and attached parking.  Most of us walked away quite impressed, although concerns about affordability surfaced when we heard the market rents - $2010 - 2400 for one bedroom and $2770-4585 for two bedrooms. 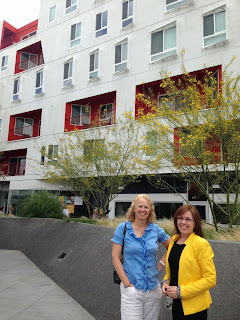 Our next stop was Bunker Hill and its impressive array of architectural landmarks.  We chose Our Lady of the Angels Cathedral by Spanish architect Rafael Moneo.  His 2002 design uses adobe-colored concrete blocks in a facade with no right angles - certainly non-traditional and a little austere.  It is the interior of the cathedral which really impressed us.  The huge nave was filled with diffused light through the extensive use of alabaster (the most in the US), but the most eye-catching feature are the John Nava tapestries which line the walls.  The artist painted saints and anonymous folk and then digitized them before being sent to Belgium to be woven.   The resulting figures - averaging 10 feet in height - have an almost a photographic quality, softened somewhat by the rich browns and pinks of the fabric.  With its extensive plaza and landscaped courtyard perimeter, the Catholic Diocese has much to be proud of.
From the cathedral, it was on to the Disney Concert Hall by Frank Gehry.  The fanciful, almost organic stainless steel facade pours out towards Grand Avenue right next to the 1960s Music Center and Dorothy Chandler Pavilion.  On the other side is The Broad, the newest LA museum set to open in September.  With its white, porous, organic skin, the building is sure to become another conversation piece about the urbanization of Grand Avenue.  One hopes that the planned pedestrian connections and open space make the street a true gathering place.