It's fun to watch downtown LA come to life.  I remember how deserted it was at night in the 1960s  after leaving a performance at the Music Center at 9 PM and having nowhere to go.  No longer.  The area is hopping and even has its own hashtag - #dtla.  If you like art, history, historic buildings, ethnic enclaves, shopping, restaurants, walking tours, people watching, music, or museums, there's something for you to explore.  And, despite the stereotype about LA and cars,  it's all in a fairly small area.

Here are my Top Ten Reasons to Love Downtown LA! (loose rankings, by the way!)

10. Chinatown - The New Chinatown (the old one was actually just east of Olvera Street) is getting better and better.  Stroll Broadway for great bargains - sip tea at the huge Wing Hop Fun Emporium,         enjoy a treat at the Pheonix Bakery, check out the new statue of Bruce Lee near the Central Plaza, enjoy slippery shrimp at Yang Chow restaurant, get the latest supplements from one of the many herb stores or check out the galleries on Chung King Road during the weekend. 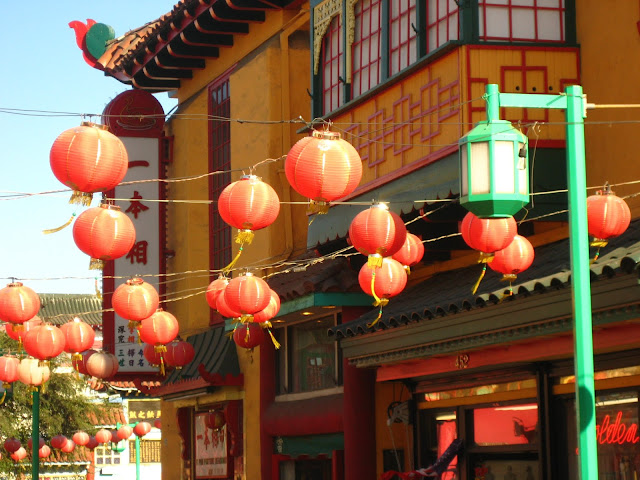 9.   Food, food and more food! -  7th Street between Figueroa and Olive is becoming Restaurant Row downtown.  I particularly love Bodega Louie, but great restaurants are popping out all over downtown.  Being a traditionalist and not a hip foodie, I really enjoy the newly refurbished Clifton's Cafeteria.  Great prices and generous portions.

8.   Japanese Village Plaza, Little Tokyo - A nicer pedestrian street in LA will be hard to find.  This shopping street angles between 1st and 2nd Streets and features wonderful shopping, food and people watching.  I like the colorful lanterns and themed architecture, tasteful shops full of clothes, art supplies and knick-knacks, nearby Buddhist temple, and the central location.


7.   Skyscrapers - You can't go to "#dtla" without looking up at its beautiful buildings - both old and new.  LA's skyline can't compare to New York or Chicago, but the City of Angels has beautiful examples of 100 years of skyscraper evolution.  From the gorgeous, Beaux Art Continental Bank Building (1904) to the Art Deco Eastern Columbia Building to the 73-story (tallest on the West Coast) US Bank Building (1990 by I.M. Pei), LA's built environment mirrors its cultural diversity.  and the new Wilshire Grand Tower will top them all at 1,100 feet!  Go to Bunker Hill, my friend, and look up and marvel.


6.   Museums - LA is museum rich, and so is downtown.  You could visit MOCA (the Museum of Contemporary Art), the Geffen Contemporary in Little Tokyo (an offshoot of MOCA), the Chinese American Museum near Olvera Street, the Japanese National Museum in Little Tokyo, and many others.  But the new kid in town is the beautiful Broad on Grand Avenue on Bunker Hill.

The Broad houses over 2000 works of contemporary art from the collection of Eli and Edythe Broad. The distinctive "veil and vault" design of the museum features a white, honey-combed skin (the "veil") and three floors of art - the top and bottom for gallery space and the middle for art storage and conservation (the "vault").  Sited  next to the stainless-stele Disney Concert Hall, the Broad's clean lines makes  distinctive statement on Grand Avenue.  The visitor experience is awesome.  You enter into the first floor lobby with its darker, organic feel and then take an escalator to the third floor where the porous facade and artificial light make for great art viewing.  Better still, the museum is free, although you must make reservations.

5.  Walking Tours - One of the best activities in downtown LA is walking tours.  The longest-running and most comprehensive are those given by the LA Conservancy - that wonderful non-profit advocacy group for historic preservation.  Every Saturday or Sunday, you can see small groups of people walking down the street, looking up at the tops of buildings as the tour guide points to an art deco embellishment or Beaux Art cornice.  It's wonderful to see people appreciating the new and old buildings downtown.

4.  Grand Central Market - Grand Central Market has been a fixture on Broadway Street downtown since 1917.  It has had numerous facelifts and remakes, the most recent of which has definitely pleased the younger "foodie" crowd.  The crowded passageways, neon lights and smells are hard to beat and the new, hip restaurants are around every corner.  I love Egg Slut, McConnell's ice cream (the coffee chip!), Weller's Deli, Tacos Tumbras y Tomas, Ramen Hood, and Berlin Currywurst.  Creative and delicious food, and you can still get some deals on produce at the center of the market.
I love the parklet out front on Broadway and right across the street is the venerable Bradbury Building.  Here's the link to the eateries: Grand Central Market vendors.

3.  Historic Architecture - LA has torn down a lot of its historic buildings but has also preserved many.  There are more historic movie palaces on Broadway than any street in the US.  Spring Street is the old "Wall Street of the West' with classic Beaux Arts-style bank buildings.  Both streets are National Register Historic Districts.  Scattered throughout the Historic Core are Art Deco, Gothic, Romanesque and Beaux Arts designs.  Look up at the ornate towers, explore the florid lobbies!  Detail abounds.

2.  Arts District - This is downtown's most happening spot.  Bounded by the LA River to the east, Alameda Street to the west, 1st Street to the north and 7th to the south, this former manufacturing and warehouse district attracted pioneering artists in the 1970s.  In the last five years, the district has exploded with new development.  Murals abound and film crews are constantly seen using the old brick buildings are backdrops.  Restaurants, bars, breweries, coffee shops, bakeries, lofts and creative spaces abound.  SciArc (the Southern California Institute of Architecture) is here located in a 1920s Santa Fe freight depot.

Every third weekend you can enjoy the "Artistsandfleas" (link:artistsandfleas) artist, designer and vintage market with over 55 talented artists selling their creations.  The same weekend you can enjoy the Hughes Estate Sales, with a huge showroom of vintage merchandise.  Many are voicing concerns about gentrification with its higher rents and prices, but the Arts District is dynamic, creative and really, really fun.  Oh, yeah.  Try the pastries at The Bread Lounge!


1.  Olvera Street - My top pick for downtown is LA's birthplace - Olvera Street.  Voted one of the top five pedestrian streets in the nation, Olvera Street has tremendous history, colorful merchandise, tight spaces, great food and an ambience all its own.  Many of the vendors have been here for generations.  Speak Spanish or not, where else can you get a "lucha libre" (wrestling mask), "paper picado" (decorative Mexican streamers), Frida Kahlo paintings, huaraches and a snow cone - all within 50 yards!

Here you'll find  LA's oldest home (Avila Adobe), a museum devoted to LA's most controversial mural, and a Victorian home - all next to LA's beautiful, original plaza, founded in 1781 by the Spanish.  I love this place and only wish it were bigger

So, as you can see, downtown LA has a lot to offer in a fairly compact area.  Take the train to Union Station and walk across the street to Olvera Street.  Or, hop on the subway, get off on Pershing Square, walk over to Grand Central Market for lunch.  Then get on the Gold Line, get off at First Street and walk one block to Japanese Village Plaza.  Downtown LA has it all!