Los Angeles is much more than freeways, movie star mansions and beaches.  In fact, it’s home to 29 locally-designated historic districts!  Yes, you heard me – LA, “LaLa Land”, the City of the Future – takes its past seriously.  Starting …

END_OF_DOCUMENT_TOKEN_TO_BE_REPLACED

SATURDAY MARCH 22 – 10 AM to 5 PM. Join Hoffy Tours on this brewfest classic! We will visit the best of northern San Diego county’s craft breweries: The Lost Abbey, Stone Brew Company, Ballast Point, and the Green Flash. A picnic lunch and plenty of snacks will be provided to help you absorb any excess alcohol! Trivia games, German drinking songs and prizes will be given. Experience one of the best craft brewery regions in the nation without worrying about driving. Sign up on the Hoffy Tours website: www.hoffytours.com. DEADLINE is March 11.

END_OF_DOCUMENT_TOKEN_TO_BE_REPLACED

Double-decker bus tour at ModernismWeek is a good overview.Palm Springs is on a roll!  Whereas a decade ago, its main drag – Palm Canyon Drive – was full of underperforming store fronts, now it is brimming with pedestrians and pride. A key fa…

END_OF_DOCUMENT_TOKEN_TO_BE_REPLACED

Aesthetics aren’t everything, but 2nd Streetand its Promenade are gorgeous.On a recent visit to Santa Ana’s Saturday night Artwalk, I realized that this is one of the few truly urban places in Orange County and an excellent case study of downtown revit…

END_OF_DOCUMENT_TOKEN_TO_BE_REPLACED

VENTURA’S DOWNTOWN; A FINE ROLE MODELCities such as Ventura are creating distinctivecivic directional signs.Way to go downtown Ventura!  Every town deserves a nice Main Street, and Ventura has built a great one.  It has all the elements – wid…

END_OF_DOCUMENT_TOKEN_TO_BE_REPLACED

One of the most fun aspects of being a tour guide is meeting people from all over the country and the world.   Ever since I started peddling my tours to the local hotels, I’ve had over 25 tours with guests from upstate New York, New Orleans, Louisiana; Arlington, Texas; Milwaukee, Wisconsin; Memphis,  Tennessee; Palm Beach, Florida; Scottsdale, Arizona; Washington, DC; Portland, Maine; even London and Frankfurt.

Everyone has been so nice and the tours give me someone to talk to while my wife’s working.   Most out-of-state guests want to see Hollywood and Beverly Hills.   I warn them that Hollywood Boulevard and the Chinese Theatre are a bit like that bar scene in the first Star Wars movie, except on this planet you will be accosted by Spider Man, Wonder Woman, and Johnny Depp!  All my fancy academic degrees didn’t teach me much about The Pirates of the Caribbean!

I never quite realized the power of media stardom or television since I’m not a big TV watcher.  Some are hoping for a movie star sighting or at least to stand where there favorite movie was filmed.    One client has been a life-long fan of the soap-opera General Hospital and and it’s been her lifetime goal to visit the studios where it was filmed (Prospect Studios, Silver Lake District).

Many guests visiting Orange County often have only one day to see LA, and it’s too overwhelming to rent a car and do it on their own.  That’s where I come in.  I’ve perfected the LA, Hollywood, Beverly Hills, Fairfax District loop.  It’s amazing what you can see in one day and thank goodness for that I-Phone traffic ap – Sigalert.com!

So far there haven’t been too many mishaps, except when someone tried to run over my clients  in Beverly Hills when they were photographing the Witch’s House.  Or the couple who almost got their purse stolen at Third Street Promenade in Santa Monica.

Some folks just want to dip their toes in the Pacific Ocean and remark how incredibly beautiful the beaches in Orange County are.  I guess it takes an outsider to help you realize just how gorgeous our home is.  Others focus in on the landscaping, noticing plants, trees and cacti that are so different from where they live.

The best part is realizing that there are super nice people everywhere who want to see and learn about this crazy place we call southern California.

END_OF_DOCUMENT_TOKEN_TO_BE_REPLACED

CLAREMONT DOES IT RIGHT!

My latest tour visited the east LA County city of Claremont.  This college town is truly one of the prettiest and most friendly in Southern California.  Originally founded by the Santa Fe Railroad, the town benefitted from…

END_OF_DOCUMENT_TOKEN_TO_BE_REPLACED

One of my absolute favorite tours is the “Four Rail” LA Skyscraper Tour.  Not only do we see 100 years of skyscraper design evolution, we also ride subways, light rail, funiculars and Amtrak.  The city looks a lot differen…

END_OF_DOCUMENT_TOKEN_TO_BE_REPLACED

Signs are the most consistently colorful feature of cities – a fact that can be both good and bad.  Commercial signs can be gorgeous and well-integrated to the architecture, especially in in wealthy cities with lots of design controls.  But, in most cities, commercial signs are often non-descript, poorly coordinated and clutter up the streetscape.  But this is a topic for a future blog.  Today we will look at community signs, and, once again, things are changing for the better. 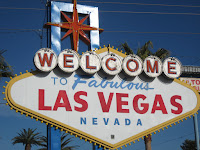 Some community signs, like the “Welcome to Las Vegas”, are iconic.  At a single glance, they represent their cities.  But what if a city has a less memorable image?  In those cases, planners and designers take a city’s most memorable symbols and put them on their community signs.  These signs are popping up all over and are helping to reinforce their city’s image. If it’s an ugly sign, not to worry!  Psychologists point out that the longer we look at something – even something quite plain – the more we like it.  This “mere exposure effect: might also explain why we all think we’re pretty good looking!  This third edition of my blog will examine two trends in community signage: community wayfinding and street signs.

Community Wayfinding Signs –  It took us long enough, but planners finally realized that our cities need iconic signs to tell us where the cool stuff is.  And the sign itself can be a symbol for the city you’re in.  Santa  Barbara’s new community directional sign serves double duty – it helps orient the visitor and reminds them of the city’s culture.

Big cities are in special need of wayfinding signs.  LA is so big and spread out, and contains so many distinct districts, that people get lost all the time.  One of the most famous American urban designers and theorists – Kevin Lynch  (The Image of the City, 1980) – thought that cities should be “legible” or readible so that people know where they are.  One characteristic of “legible” or imageable cities is that they contain districts of distinct identity that help make a city interesting and diverse.

Less imageable cities need wayfinding signs as well, and perhaps even more. Your city may not be the most exciting, but you do have destinations like the library, City Hall, the park.  Designing an attractive community sign program can help give you city a stronger sense of identity.

Street Signs – Something as seemingly boring as a street sign can also make a big difference to a community’s image.  Street signs are on almost every corner, so why not give them some pizzazz?
﻿﻿﻿
﻿
﻿

END_OF_DOCUMENT_TOKEN_TO_BE_REPLACED

Have you noticed lately that many shopping centers are becoming quite sittable?  Have you seen leather chairs, outdoor fireplaces and cafe tables “a la Europa” inside of your local mall?  Well, it hasn’t always been this way, and I think there is one man who really started this comfort movement with a landmark study over 30 years ago.  His name is William Whyte, and he’s my hero.

Of course, it hasn’t always been this way.  American cities have been very cruel to pedestrians and those who like to linger.  Cities of the 1800s were dirty places, so devoid of parkland that people in big cities actually picnicked in cemeteries – often the only green spaces available.  The first three quarters of the 20th century weren’t much better.  People with means abandoned the city for the suburbs to find their dream house.  The suburbs grew so fast that there was little attention to any public spaces other than roads and an occasional park.  Starting in the 1970s, some cities gave developers more floor space if they put in a plaza but many of them sat virtually unused. Then along came William Whtye, sociologist and urbanist extraordinaire!
Whyte was hired by the City of New York to figure out why some plazas were very active and others quite dead.  He and his team of graduate students used unobstrusive observation (the old “hidden camera” trick) of hundreds of urban spaces and discovered the key elements of a good plaza.  His book and film – The Social Life of Small Urban Spaces (1980) and accompanying film revolutionized the way we design plazas in this country.  Here is a brief clip of his classic study – https://vimeo.com/6821934
Whyte and his team discovered that the most successful plazas had lots of sittable space (preferably movable seating), were located right next to the street and provided people with a sense of enclosure without cutting them off from the city.  He found that shade and food were important amenities, but another quality he called “triangulation” – the ability of a place to connect strangers and get them talking – was even more important.  These features could be street entertainment, an interesting sculpture, a spitting fountain.  The City of New York liked his study so much that they totally changed their zoning ordinance to encourage those amenities which bring people together in comfort and interest.
Whyte’s study was perhaps the best example ever of applied social science research – research that improves people’s lives.  After his video was shown on public television, Whyte’s ideas spread throughout the planning community.  Previous empty spaces were enlivened.  Shopping center developers realized that a comfortable place to sit might actually boost revenues.  Cities began to get more serious about making their town centers comfortable again.  Hooray for the planners!  Bravo to William Whyte!
So, as you cruise your local town center and check out its gathering places, look for the following:

1).  Is the plaza close to the street – not raised and not sunken – and can passersby see it?
2).  Does it have lots of comfortable seating options?
3).  Does the plaza provide a sense of visual enclosure without being cut off from surrounding areas?
4).  Does it contain an interesting visual feature or focal point that draws attention?